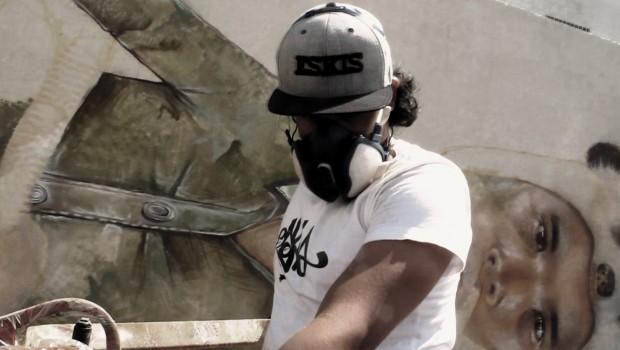 Koz Dos born in Caracas, Venezuela. He is Graffiti’s artist who had the first´s steps in the Caracas hood. He graduated at the art´s university (“UNEARTE” Caracas, Venezuela). He got the degree course in plastic´s arts. He began doing Graffiti Writer, bombs and Tags, all this paints technics development him to a new styles the figurative and representative´s Graffiti´s style, in which he create imaginary characters that harmonize the realist, flat´s images, triangles lines and dots.

He painted a normal people portrait´s unified with and animal’s representation like mask and caps, the rational and perfection together with the irrational and animal this live us a lot to the imagination. All this represent the confrontation between mankind and animal to coexist. This confrontation has and harmony by the treatment of the images paints. The gesture, the impression and the unconscious take the main character in the reality.

He has participated in different nationals and internationals events and exhibition. In 2011 He had him first exhibition in Caracas, where he had the opportunity of show him work of probations of extra pictorial support, subsequent, he participated in him first international show in Quito, Ecuador where he has been the opportunity of show him art, him painting can be seen in Wiesbaden, Berlín, Magdeburgo, París, Perpignan, Marsella, Madrid, Barcelona, Quito, Curitiba, Porto Alegre, Caxias do Sul, Cali, Tel Aviv, Caracas, Maracay, Maracaibo and other cities.

Now he is multidisciplinary´s writer, Koz Dos works with different technics depends of the place and context where realize the picture intervention in walls of big dimensions where he create him pictures. He restlessness take him at the world of the Graphics arts and digital design.